When magnesium is coupled with steel, it not only corrodes itself but also protects the steel structure (Pathak et al., 2012Pathak, S.S., Mendon, S.K., Blanton, M.D., Rawlins, J.W. (2012). Magnesium-based sacrificial anode cathodic protection coatings (Mg-rich primers) for aluminum alloys. Metals 2 (3), 353-376. https://doi.org/10.3390/met2030353.). The cathodic reaction (oxygen reduction) takes place largely on the steel surface to enhance the pH of the metal, which further facilitates the precipitation of protective carbonate compounds on that surface (Fontana, 2005Fontana, M.G. (2005). Corrosion engineering. McGraw-Hill Publishing Company, New Delhi.) and provides cathodic protection by making the steel structure a cathode. The major factor in the corrosion of magnesium is the negative difference effect. The inhibitive function of the anion (e.g. bicarbonate, nitrates, etc.) is related directly to the ability of the anion to adsorb onto the metal surface, hence preventing the dissolution of the metal ion (Thomaz et al., 2010Thomaz, T., Weber, C.R., Pelegrini Jr., T., Dick, L.F.P., Knörnschild, G. (2010). The negative difference effect of magnesium and of the AZ91 alloy in chloride and stannate-containing solutions. Corros. Sci. 52 (7), 2235-2243. https://doi.org/10.1016/j.corsci.2010.03.010.).

Polarity reversal occurs due to passivation. Passivation refers to the formation of a thin film of corrosion product, which acts as a barrier to further oxidation, known as the passive film on the surface of the metal (Kim and Young, 2013Kim, J.J., Young, Y.M. (2013). Study on the passive film of type 316 stainless steel. Int. J. Electrochem. Sci. 8 (10), 11847-11859.; Eyvaz et al., 2014Eyvaz, M., Gürbulak, S., Kara, S., Yüksel, E. (2014). Preventing of cathode passivation/deposition in electrochemical treatment methods-A case study on winery wastewater with electrocoagulation. In Modern Electrochemical Methods in Nano, Surface and Corrosion Science. Ed. Aliofkhazraei, M., IntechOpen. https://doi.org/10.5772/58580.). The reversal of polarity is generally ascribed to the passivation of Mg, possibly through the formation of a surface layer of oxide or basic magnesium salt. For passivation to occur under open-circuit conditions oxygen must be present but not when Mg is anodically polarized in aqueous media. The presence of chloride and sulfate ions prevents the passivation of Mg. Based on open-circuit potential measurements, it was found that no polarity reversal in the Mg-steel couple occurred in tap water when maintained at constant pH and water composition over the temperature range of 20 to 90 °C. This was thought to be due to the relatively high concentrations of chloride and sulfate present in the water.

Therefore, in this research work, the behavior of the steel-magnesium galvanic couple was analyzed in two solutions; Tap water and 0.1M NaHCO3 at three different temperatures; (i) 40 ℃ (ii) 60 ℃ and (iii) 80 ℃ to study the polarity reversal phenomenon. Since the steel and magnesium are coupled in a variety of engineering applications for providing cathodic protection to steel. Therefore, there must be adequate knowledge of the corrosion behavior of Mg-steel couples under different temperatures and corrosive media. As if polarity reversal occurred in the Mg it will lead to the failure of the steel/structure. Thus, the response of Mg-steel couple under different corrosive media at various temperatures must be determined so that corrective action during the design process can be taken to avoid catastrophic failure. Hence, to replicate the actual service environment and to know the behavior and mechanism of corrosion, the steel and magnesium were coupled during sample preparation. The corrosion behavior of both solutions was studied by using the potentiodynamic polarization method. The results were analyzed by using the Tafel extrapolation method. The corrosion mechanism specifically, the formation of corrosion products at the steel-magnesium interface was elaborated by using optical and electron microscopic techniques.

Pure magnesium rod and mild steel bar have been selected in making a galvanic couple. Both the materials with 1cm length and 0.5cm diameter were embedded in epoxy to perform cold mounting. Copper wires were also attached to the samples through soldering to prepare working electrodes for Potentiodynamic analysis. The composition analysis of the materials used in this study is listed in Table 1.

Table 1.  Compositional analysis of materials used in a galvanic couple

Before conducting potentiodynamic analysis, all the working electrodes were ground using various grit sizes (180 to 2000) and polished with a Benetec Polishing machine to produce a scratch-free mirror-like surface. Two corrosive media i.e. tap water and sodium bicarbonate were selected to study the corrosion behavior of the galvanic couples. In the first phase, tap water was used as a medium for corrosion testing with temperatures of 40 ℃, 60 ℃, and 80 ℃. Secondly, a 0.1M solution of sodium bicarbonate was prepared using deionized water as a corrosive medium, and testing was done at five different temperatures ranging from 40 ℃ to 80 ℃ with a difference of 10 ℃. The bicarbonate solution used for corrosion analysis was made from distilled and deionized water that had been saturated with a continuous flow of 1 bar of Nitrogen gas. The solution was prepared with analytical grade powder of NaHCO3 (Sigma-Aldrich) at a concentration of 0.5M and a pH between 8.4 to 8.6. The test temperature was kept constant at room temperature. Compositional analysis of freshly prepared NaHCO3 solution and the tap water used in the analysis is presented in Table 2.

For electrochemical testing, Gamry G-750 Potentiostat was used with three electrodes immersed in a selected environment to complete a cell.

The Tafel curves were measured at a scan rate of 1 mV·s-1. The beaker containing corrosive medium was covered with a heating mantle and connected to the omega benchtop controller CSi8D series. Henceforth, the samples were tested at various temperatures (40 ℃, 50 ℃, 60 ℃, 70 ℃ and 80 ℃).

The following sections dealt with the results obtained using potentiodynamic analysis of galvanic couples and proceeded with the subsequent sections pertinent to the microstructure evolution of the corroded surfaces.

As received samples were prepared using standard metallographic techniques as used for working electrodes and analyzed by Olympus image analyzer GX51. Figure 1a represented the microstructure of mild steel consisting of ferrite (light) and pearlite phase (black). Likewise, the microstructure of magnesium in as received condition consisted of a typical bimodal type structure in which grains are ranging from 50 microns to 190 microns as shown in Fig. 1b.

Figure 1.  Microstructure of as-received materials used in galvanic couple: (a) mild steel, and (b) magnesium.

3.2. Potentiodynamic curves of a steel-magnesium galvanic couple in tap water

The results evaluated from the potentiodynamic study of a steel-magnesium galvanic couple exposed to tap water at three different temperatures (40, 60, and 80 ℃) are depicted in Fig. 2 (a to c). 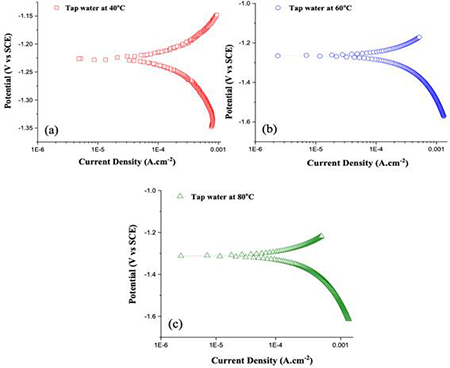 In the corresponding galvanic cell at 60 and 80 ℃, the magnesium was polarized appreciably more than steel and the potential regularly fluctuated. This fluctuation occurs mainly because of the potential increase of electrodes in the electrochemical cell. Principally, throughout all these three experiments the mild steel remains cathodic in the galvanic cell. The magnesium sacrifices itself as a sacrificial anode and hence protecting the steel surface. This happens generally because of the more negative potential of magnesium than that of steel. Therefore, the oxidation reaction takes place only on the magnesium surface whereas the reduction reaction takes place on the steel surface.

In the light of the above-mentioned experiments, there was no polarity reversal phenomenon observed in the potentiodynamic study of the steel-magnesium galvanic couple in tap water at 40 °C, 60 °C, and 80 °C. At all temperatures, the corrosion potential for mild steel was found nobler than magnesium. Thus, when two metals were galvanically coupled and immersed in electrolytic solution the steel was cathodically protected at the expense of an additional corrosion product formed on the surface of magnesium.

The potential-current behavior of mild steel and magnesium galvanic couple electrodes exposed to 0.1 M sodium bicarbonate solution at different temperatures is given in Fig. 4 (a, b, c, d, and e). 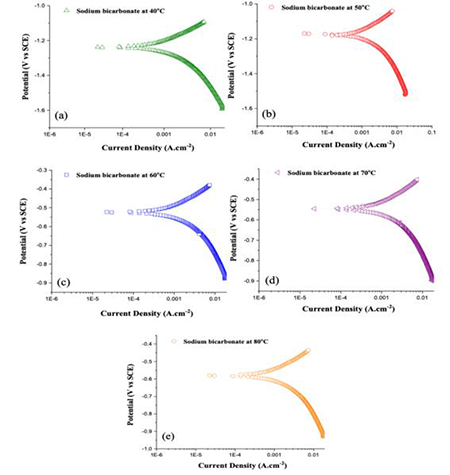 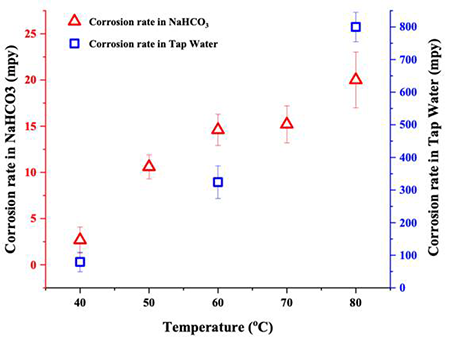 At 50 °C, the galvanic couple shows a rapid rise in electrode potential that was stabilized near -1.18 V with a current density of 66.30 mA, suggesting that the passivation begins in the steel-magnesium galvanic couple. Passivation on the magnesium metal at this temperature indicated that further oxidation was inhibited. By increasing the temperature of galvanic cell from 60 °C to 80 °C, a huge difference in electrode potentials were observed with the value of -0.52, -0.55 and -0.58 V respectively. The corresponding corrosion current density was found to be 69.90, 76.30, and 84.05 mA at 60°C, 70 °C, and 80 °C respectively. This sudden increase in the electrode potential of the steel-magnesium galvanic couple indicated a passive response of magnesium. A passive thin layer was formed on the surface of magnesium that restricts further oxidation. In this environment, the steel corrodes largely as compared to magnesium also shown in Fig 6. Furthermore, it has been conceived that in the presence of oxygen and under 0.1M sodium bicarbonate, magnesium acted as a cathode at higher temperatures, whereas the steel structure became anodic and corroded. The corrosion rates at various temperatures were calculated by using the Tafel extrapolation method. The results were displayed in Fig. 5. 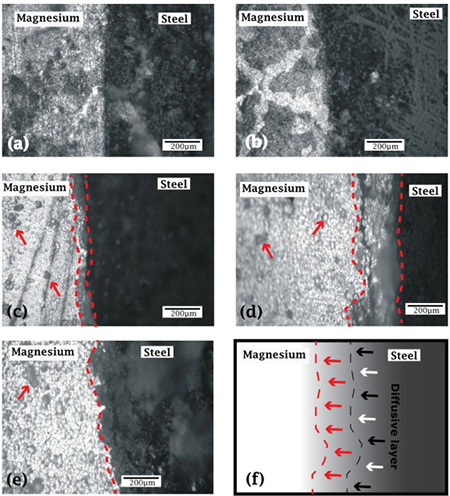 In the light of the above-mentioned experiments, there was a polarity reversal phenomenon observed in the potentiodynamic study of steel-magnesium galvanic couple in 0.1M sodium bicarbonate solution at 50 °C, 60 °C 70 °C, and 80 °C. Under the experimental conditions used, magnesium passivated at warm temperatures i.e. 80 °C signified that the steel would deteriorate and became anodic under these conditions.

3.5. Microstructures of a steel-magnesium galvanic couple in 0.1M sodium bicarbonate

Microstructures were captured from the image analyzer (GX51, Olympus) after electrochemical testing of steel-magnesium couples and are shown in Fig. 6 (a to e). Figure 6a shows that in the experiment made at 40 °C, corrosion damage was observed on both steel and magnesium surfaces. However, as the temperature rises the corrosion attack was started from the magnesium-steel junction and covered the large area of steel. The greater part of the steel surface was damaged by corrosion attack, and widespread pitting occurred. On the other hand, the magnesium structure covers by a thin passive layer of carbonates, which stops the magnesium to act as a sacrificial anode. At all the temperatures, it can be seen that a thin layer of corrosion product was developed at 50 °C and grew towards the magnesium side as indicated in Fig. 6f. At warm temperatures, the severity of corrosion increased and steel corroded at a faster rate.

Figure 7 show scanning electron microscopic results of the magnesium electrode. The image in Fig. 7 (a, b), clearly indicates the passivation occur on the magnesium surface when it was galvanically coupled with steel exposed to 0.1M sodium bicarbonate in the presence of oxygen at 70 °C. The passive layer formed on the surface of magnesium reveals that magnesium would no longer act as a sacrificial anode to protect the steel surface. This layer resulted owing to cathode reaction, which took place on magnesium surface and anodic reaction occurred on steel surface as reported by Glass & Ashworth (Glass and Ashworth, 1985Glass, G.K., Ashworth, V. (1985). The corrosion behaviour of the zinc-mild steel galvanic cell in hot sodium bicarbonate solution. Corros. Sci. 25 (11), 971-983. https://doi.org/10.1016/0010-938X(85)90066-6.). 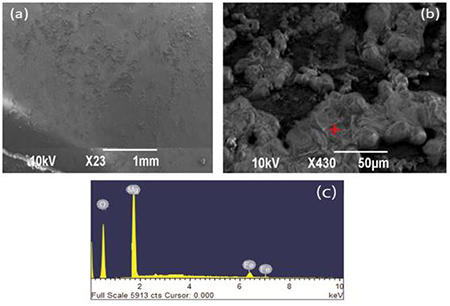 This research work highlighted the behavior of galvanic couple between magnesium and steel under different temperatures using tap water and 0.1M sodium bicarbonate solution as corrosive media. The main findings of this research work are as follows: